This breaking concept drove the original idea of gene therapy. The HIV pandemic in the s alerted humanity to the silent spreading of a deadly disease. HIV, a Lentivirus , was revealed to be a highly sophisticated virus with fine-tuned regulation, and it was mostly deciphered a decade after its discovery [ 5 ]. Scientists took advantage of the impressive knowledge gained about the virus in a decade transforming a dangerous virus into a safe viral vector.


A method for production was established, and subsequent improvements ensure that the currently available format of the third generation of self-inactivating SIN vector [ 18 ] is generated as the safest and easiest-to-use vector available. It has multipurpose uses, from research and preclinical studies to clinical trials as there is a commercial product based on this type of vector. In all cases the procedure followed for production is almost the same, representing one of the main drawbacks, as manufacturing is not fully established, and a series of major concerns must be resolved in order to cover large mid- to long-term market requirements.

Below is a brief summary of several relevant factors which must be addressed. Production of HIV-derived vectors is a poorly optimized process, and a major hurdle to large-scale manufacturing is due in part to a deficient production of fully biologically active virions recovered in the culture media [ 19 ].

There are at least four major issues during production that can result in this poor yield: a transfection robustness, b protein interactions during morphogenesis, c the nature of the cell system used for production, and d extremely labile essential components within the viral particles that lose activity during the production testing [ 22 , 23 ].

Production of HIV-derived lentivectors, and likewise other retroviral vectors derived from feline or equine Lentivirus or from gammaretroviruses, is based on DNA transfection of producer cells. The overall method was firstly demonstrated as feasible in pioneering research using poliovirus [ 24 , 25 ], and it is based on the concept that the viral genome cloned in plasmids can recapitulate the genetic and morphogenetic instructions upon introduction in a eukaryotic cell in order to produce viral progeny. These systems are currently also used to produce AAV-derived vectors.

The basis is that packaging signals acting in cis are encoded in discrete regions of the viral genome. All the accessory functions are expressed during production from the so-called helper plasmids but are not licensed for encapsidation, as they do not carry the packaging signals, nor are they encoded in the transfer plasmid. The current model of production on large or small scales is based on DNA transfection of three or four plasmids. For a full, detailed description of the plasmid used in the production of HIV-derived vectors, see [ 8 ].

As a result, efficiency is compromised by the proportion of cells transfected with the proper combination of plasmids, and indeed earlier second-generation production systems that use just three plasmids are more efficient in production [ 6 ]. Lentiviral vectors can be designed to carry heterologous envelope proteins. This pseudotyping allows the selective targeting of specific cells, conferring broader uses on the vector. Thus, lentivectors bearing RD [ 26 ], CD [ 27 ], and more recently measles virus [ 28 ] envelope glycoproteins, among others, have been described as conferring specific targeting in B cells, T cells, and hematopoietic stem cells, respectively.

However, most of the lentivectors that have entered into the clinic and are commonly being used in research are pseudotyped with Vesicular stomatitis virus g protein VSVg.

There are two reasons for this. First, a wide number of different cell types are targeted by such an envelope, and second, it confers robustness on the viral particle during the purification stages [ 29 ]. However, the presence of the VSV receptor in the producer cell line contributes to diminishing the viral burden in the harvest [ 30 ]. Envelope proteins are membrane proteins that pass through the secretory pathway involving the endoplasmic reticulum cisternae and the Golgi apparatus, before they reach the plasma membrane, a system also used for the synthesis and recycling of the membrane receptors.

Prevention of a premature encounter between ligand and receptor is mandatory, in order to increase the env protein available for the morphogenetic program. Indeed, the impact of this phenomenon has evolved in the natural infection of HIV. Vpu, an HIV accessory protein see below , plays a dual role in the viral cycle, firstly by promoting egress in a cell-type-dependent manner and secondly by controlling the recircularization of envelope proteins during the synthesis and preventing premature binding of the HIV gp env protein with the CD4 natural receptor during T-cell infection [ 31 , 32 ].

To our knowledge no data has been published which accounts for the impact of such a process autotransduction during HIV-derived VSV-pseudotyped processes, but data obtained in our company indicate that this phenomenon is actually taking place in the producer cell. Different lines are currently being developed at VIVEbiotech to minimize or fully prevent this phenomenon.

In the case of HIV, unlike to Gammaretrovirus , there is an array of six viral products collectively named accessory proteins. Their roles are different throughout the viral life cycle. HIV-derived vectors are produced in the absence of five of the six accessory proteins encoded by the wild-type virus: with the exception of rev, the other five are not expressed in helper plasmids. The rationale is to minimize the presence of viral sequences in the transfer plasmid, enabling safer vectors and minimizing the recombination between viral sequences in order to limit the risk of rescue of wild-type virus during production.

Tat protein was unnecessary within the design of third-generation vectors, as no viral promoter was used in production. However, as has been demonstrated, the effect of those other accessory proteins is not negligible, and their function during vector production is controversial [ 31 , 32 ]. As described above DNA transfection is the current and unique manner to produce lentiviral vectors. Three major concerns must be considered about this approach: Efficiency. Transfection of four plasmids raises a few concerns that affect the reproducibility and efficacy [ 6 ].

Alternative procedures rely on the generation of stable producer cells bearing helper functions, limiting the transfection to just the transfer plasmid, which aids robustness and production yields. Different approaches for either constitutive or inducible systems have been designed [ 33 ], but in most cases low titers have been achieved. Toxicity of the VSV proteins has been cited as limiting more efficient systems.

DNA, just like any other reagent employed in the manufacturing process, requires identical strict compliance with GMP. The production of batches requires a certification of analysis that includes protein contamination, sterility, and the sequencing of all plasmids, both helper and transfer plasmids. These tests and the large amount of DNA required to scale-up the process require an improvement in cost-effective methods regarding quantity.

It is worth pointing out that to our knowledge there are no systematic studies addressing the relative efficiency of the two methods, taking into account not just vector yields but also cost-effectiveness and the impact on the cost of the production process. There are several excellent reviews on the specific steps during the manufacture of lentiviral vectors, the approaches to consider when scaling up and the critical points to consider for decision-making [ 13 , 14 , 34 ].

However, all of the processes must conciliate at least the next three considerations: a potency, meaning the capability of producing large quantities of vector; b robustness, i. In particular, HIV-1 should be one of the most practical gene transfer vectors for gene therapy applications because this is the best studied retrovirus.

However, in this vector production system, there is a potential risk for the generation of RCL; a recombination event would occur during subsequent reverse transcription in transduced cells between two RNAs that are derived from the transfer vector plasmid and the packaging plasmid and incidentally copackaged within the same virion Fig. Schematic representation of HIVderived lentiviral vector packaging constructs.

To reduce the potential risk of the generation of replication competent viruses, all accessory genes vif, vpr, vpu, and nef are removed from or mutated in the packaging plasmids in second-generation lentiviral vectors B.

The second-generation vectors, however, still carry the transcriptionally active LTR elements that could induce the homologous recombination between the vector genome and wild-type HIV Thus, further improvements were made in the third-generation lentiviral vectors. Moreover, expression of Rev protein is directed by a separate plasmid, but not by the packaging plasmid encoding gag and pol genes Wagner et al. Currently, third-generation SIN lentiviral vector system offers the best safety profile in terms of generation of RCL because this vector requires only three HIV-1 genes gag , pol , and rev for production, however safety improvement in the design of HIVderived lentiviral vectors is still one of the challenging areas in gene therapy study.

Lentiviral vectors hold great promise for a gene therapy approach to inherited and acquired diseases. To meet the standards required for clinical applications, a number of regulatable gene expression systems have been developed, and some of them are indeed incorporated into viral vectors including HIVderived lentiviral vectors reviewed in Goverdhana et al.

Therefore, recent efforts have been mostly focused on the development of chimeric gene regulatable systems derived from prokaryotic, eukaryotic, and viral elements, which are designed to enhance specificity and activity of transgene expression Fussenegger, The most widely used inducible system in lentiviral vectors is the tetracycline Tet -regulated system. This system was originally based on binding of the Tet-controlled repressor tetR , a This type of original Tet-regulated system, called Tet-off system, has been incorporated into HIVderived lentiviral vectors Gascon et al.

In the first study that employed the Tet-off system in the context of a lentiviral vector, transgene induction by the withdrawal of Dox resulted in a more than fold increase in the expression level of a GFP reporter gene Kafri et al. Of note, the Dox-dependent regulation of GFP expression was also confirmed in the brain cells of rats that had been transduced by the lentiviral vector and then administered Dox through drinking water, indicating applicability of the gene regulatable lentiviral vectors in vivo Kafri et al. 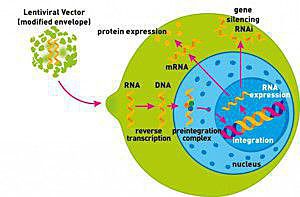